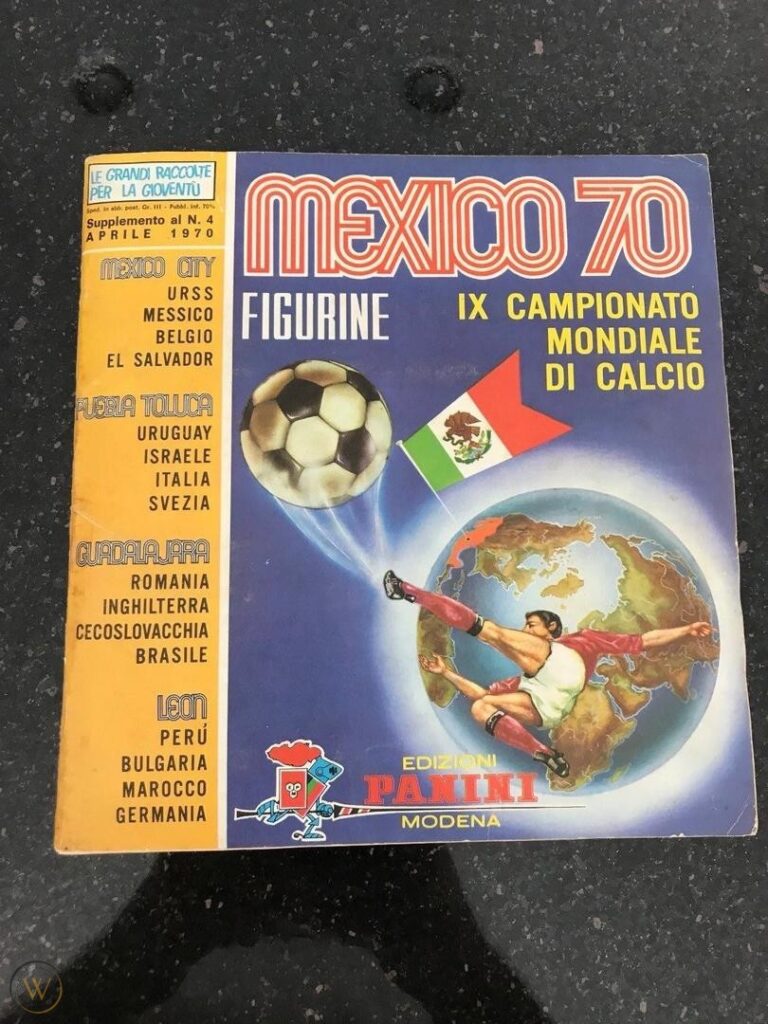 The World Cup of Soccer kicked off recently, and with it comes the opportunity to talk about the beautiful game and its legion of collectibles. Initially, I peered through the WorthPoint® Price Guide to determine a particular subject of focus, but the CBS news serial 60 Minutes quickly brought a topic into focus: soccer stickers.

Let me be clear. Like many of us, I collected stickers as a kid, filling albums for the better part of my first decade as a collector. Between O-Pee-Chee and Panini stickers of hockey, baseball, Ghostbusters, and Teenage Mutant Ninja Turtles, I placed as many of these beauties as I could into albums and discarded wrappers and backs without a care in the world.

The same, of course, is the case for the soccer stickers, as 60 Minutes reported. Reporter Jon Wertheim shared the story of collectors who filled sticker albums since the 1970 World Cup of Soccer in Mexico. This was when Italy’s Panini brand made a big splash in the sports market by acquiring what is today one of the most coveted licenses in all of athletics.

I sat back in amazement as Wertheim spoke with individuals who had Argentian legend Diego Maradona’s first sticker, not in a graded and sealed holder but instead placed carefully into that year’s album. One interviewee had filled multiple albums with the soccer legend. This collector, incidentally, had Panini World Cup of Soccer stickers all over his house, including rare uncut sheets hiding under his dining room table. His very tolerant spouse is to be commended.

Seeing those filled albums was a sight to behold. It takes dedication not only to fill multiple albums but to keep that dedication going when there are four-year intervals between the product’s release. Many collectors today would say they would lose interest in a product if there were such a gap between releases. Imagine, for example, if the Topps flagship brand of baseball cards only appeared every four years or if Funko Pop had a lengthy span between releases in football. Something else would grab collector attention and credit card payments.

The question now is whether these Panini World Cup stickers are worth much, and it may surprise you to learn that the value can be pretty high.

The most prominent auction I found was from Goldin. The auction house, remarkably, offered up a 2006 World Cup of Soccer unopened factory case in April 2022. This case contained 12 sticker boxes, each containing 144 stickers (24 packs of six stickers apiece). Thus, the possibility of getting multiple copies of the Cristiano Ronaldo or Lionel Messi stickers, along with other superstars. The case sold for $7,800.

Look at another Goldin auction, this time from 2021, for the potential windfall from opening this case. A lot featured three Ronaldo stickers, all graded 10 by PSA, sold for $7,200. At the time of the auction, only 30 copies of the sticker had received this gem mint grade, an incredible rarity for a piece like this. Go back a few tournaments and see that a single box of 1978 Panini World Cup of Soccer stickers sold for nearly $5,000 in 2013. This series includes the likes of Hugo Sanchez, Pele, and others.

If you are contemplating picking up some stickers from the 2022 series, there will need to be the choice of keeping the stickers intact or giving in to the fun of filling an album. There isn’t an easy answer, except in cases like the one-of-one black parallel stickers. One of these stickers, depicting American midfielder/winger Giovanni Reyna, sold for $4,000 in September 2022. Sticking this one in an album would have been a costly mistake.

This isn’t to say that putting together an album destroys value. This may surprise sports card collectors, where mint condition is a huge value factor, and removing a sticker from its backing, horribly altering the from-the-factory condition, is considered gauche.

Stickers are a whole other animal. The prospect of having a complete set intact in an album is such a tradition that these completed albums can have high demand. Witness, for example, a 2018 auction of the first-ever Panini World Cup set, commemorating the 1970 competition from Mexico. This auction saw a final bid of $3,500.

Interestingly, it seems collectors prefer having stickers and albums together. Consider that the same 1970 series, not affixed in an album, was listed on eBay just a couple of years earlier. The set sold for just under $1,600. Note that none of the stickers were graded. Grading would have upped the price considerably, even in those earlier days.

The question for collectors and investors is what to do with the 2022 Panini World Cup of Soccer stickers. Setting aside the aforementioned black parallel for a moment, you still have tremendous players to pursue, not the least of which are Messi, Neymar Jr., and Ronaldo.

There will inevitably be an investor and collector market for these individuals. While they already have collector attention, young and emerging stars such as Alphonso Davies and Ryan Gravenberch look to be in demand over the coming years.

This, however, should not interrupt the fun of sticker albums. Whether for yourself or as a cross-generational activity, stickers are an affordable activity and pursuit. The pack price is inoffensive by design, giving fans a decent chance at finishing a full album.

So go for it. Have some fun with Panini World Cup of Soccer stickers. But make sure that what you’re putting in an album doesn’t have a different colored border or have the potential to strike it big in the secondary market (or at least make sure you have an extra copy).

Jon Waldman is a Winnipeg-based writer. He has written for Beckett, Go GTS, Canadian Sports Collector, and several other hobby outlets over his two decades in the hobby. His experience also includes two books on sports cards and memorabilia. Connect with Jon on Twitter at @jonwaldman.