Interested in Baroque furniture? If not, you should be! This evocative, brusque artistic period makes a major statement in any home. Here at Styylish, we carry a range of items in the Baroque style, from dressers to tables to chests of drawers, including many German Baroque pieces, in particular. Read on for some of our top featured offerings, and then scroll further for information on the Baroque style. 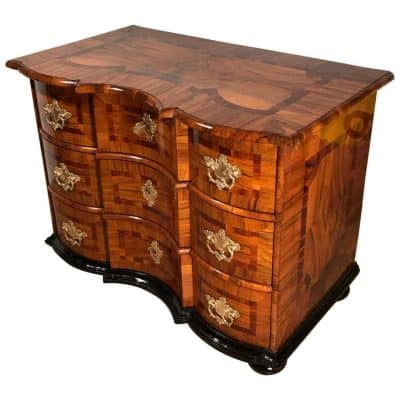 This exquisite German Baroque dresser incorporates an alluring walnut veneer topped with marquetry details in plum wood. It features three drawers with an ebonized base and curved front. The brass fittings are all original.

Baroque chests of drawers like this one, also known as commodes, became especially fashionable in Bavarian courts around 1730. Cabinet makers frequently crafted with walnut veneer and added intricate geometric or curved inlays made of exotic imported timbers such as ebony, mahogany or locally sourced-woods. German Baroque craftsmen, like their counterparts in France, used prestigious brass or bronze fittings to ennoble their furniture pieces. Around 1740, these commodes became one of the preferred furnishings of many rulers’ throne representation rooms.

The dresser measures 33.08” H 42.52” W 24.41” D. It is refinished and French polished. It ships from Germany and our pricing includes shipping costs to Boston. 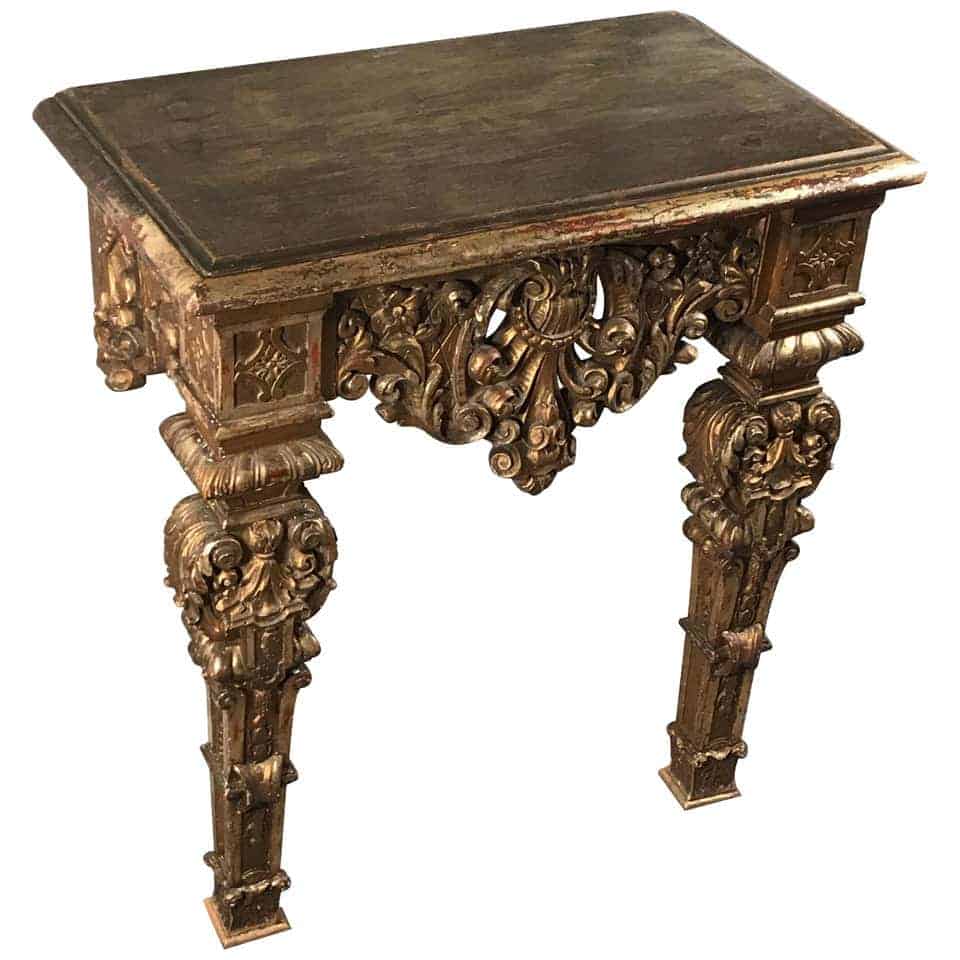 This elegant 18th century giltwood console table is an eyecatcher due to its intricately carved giltwood detailing. This is the perfect highlight for a small entryway. This table showcases the typical features of the 17th-18th century Baroque aesthetic and style, with myriad minute detailing on the legs and siding. Acanthus leaves and scrollwork embellish its symmetrical structure.

This console table arrives in original condition with the expected wear and tear and some retouches from earlier restorations. It measures 29.53” H x 25.99” W x 13.78” D. 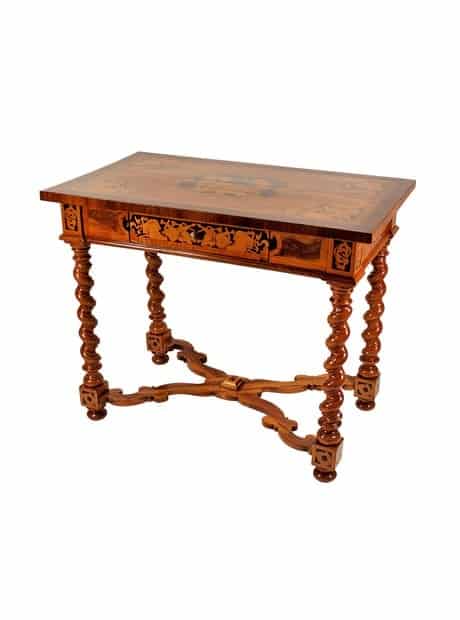 Down from a standard selling price of $5,500, this one-of-a-kind Baroque table sports an inlaid walnut veneer.

The alluring intarsia consist of a mixture of cherry wood, kingwood, walnut and elm.

Each depicts the beautiful imagery of Roman weapons and armor on the apron and top. The central medallion depicts two commanders in full armor, and a curved stretcher joins the table’s four twisted legs.

This table was probably originally used as a writing desk, and thought it would work well as a desk, this i table would also make an excellent console table for an entryway. In any case, the beautiful intarsia makes this table a one-of-a-kind, superlative addition to any interior. It measures 31.49” H x 39.47” W x 23.22” D, and is in very good condition. 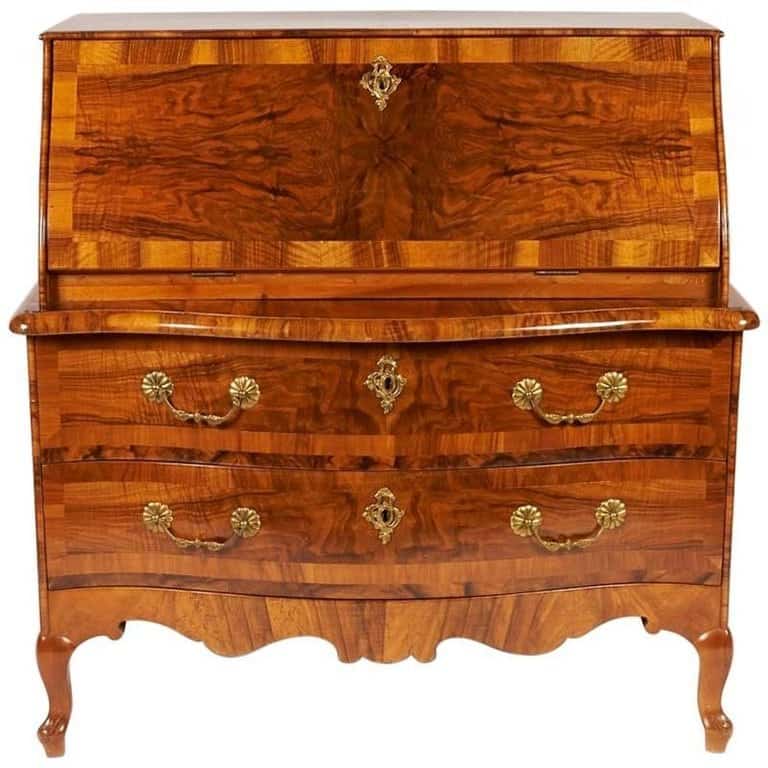 An elegant 18th century Baroque secretaire, attributed to master cabinetmaker Mathaeus Funk (1697-1783). The sectaire features a rectangular body with two drawers and a slightly convex front. The foldable desk contains 11 drawers and one compartment. This piece comes with its original fittings.

The drawer interiors are covered with 18th century paste paper. This “Herrnhuter Kleisterpapier” was a trademark of Funk’s style. The secretaire ships from Germany, and shipping costs to Boston are included in the price. Dimensions are 43.31” H, 43.31” W, 25.98” D. 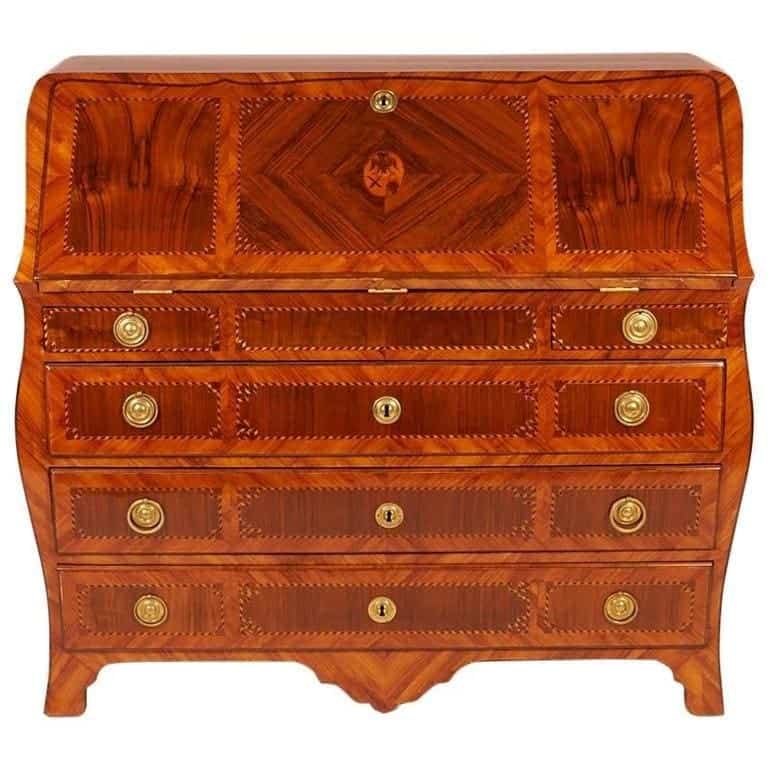 Here we have an elaborate bombe-shaped desk with beautiful walnut, elmwood and mahogany veneer and marquetry, partially ebonized. Behind the fall front are six drawers and six open compartments along with one secret compartment. We believe this secretaire hails from the Lake of Constance region. 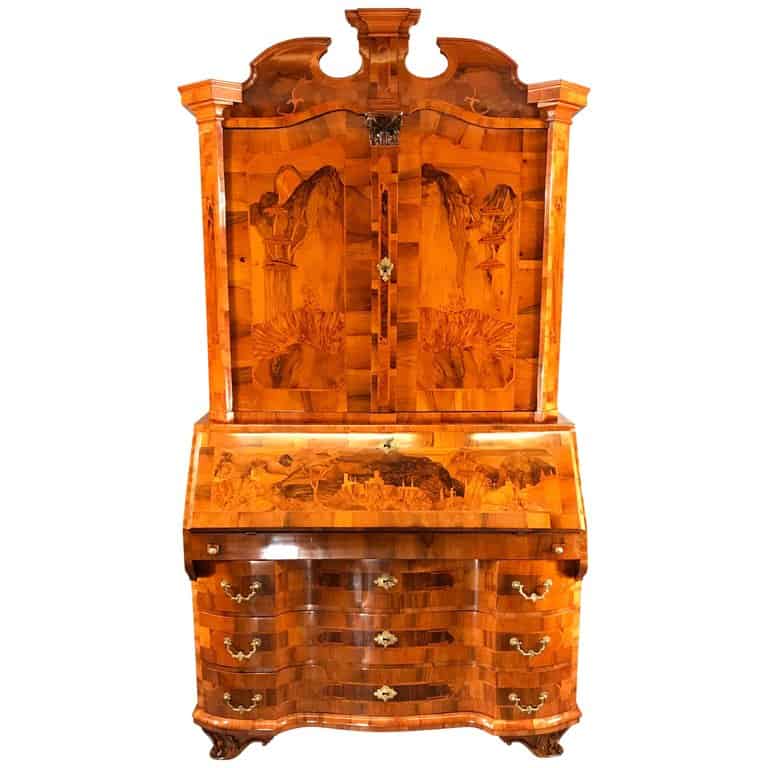 A powerful, imposing cabinet piece with beautiful walnut veneer and intricate landscape and figural marquetry. Simply put, this is an exquisite piece of furniture, a true collectors item, with intricate inlays interspersed throughout the surface, from castle silhouettes to pastoral scenes. It is hard to find another piece of furniture like this, and it’s the perfect centerpiece for any living room or sitting room. Photos simply cannot do this item justice. 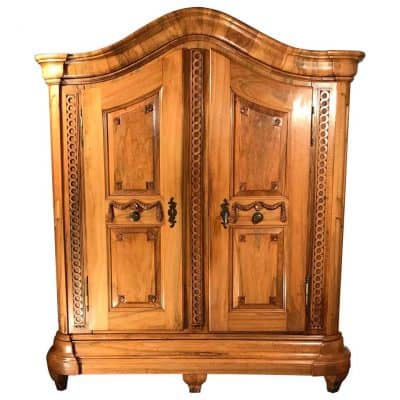 This armoire features delicately carved walnut details, with festoons and flowers adorning its twin doors. Intertwined between the doors and on the sides are patterned serpentine ribbons.The outline of this armoire maintains the traditional Baroque curved ledge, but the design language of the carved decorations showcases the more geometrical Louis XVI style ushered in in the latter portion of the 18th century. 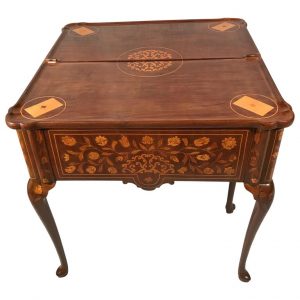 Exceptional card table, with beautiful marquetry featuring flowers and birds on the top and the sides. The unfolded table depicts inlays of playing cards in each corner along with medallion centerpiece. Drawers to store playing cards are on each side of the table. This is a wonderful example of 18th century Dutch craftsmanship.

The History of the Baroque

Interestingly enough, the Baroque period was ushered in by the Catholic Church at the end of the 16th century. It came in response to growing criticisms of the Church, largely catalyzed by the Protestant Reformation. Given that the more refined artistic styles of the Renaissance only appealed to the educated, the Church turned to more grand, evocative art forms to demonstrate the power of the Church via an appeal to base, human emotions.

The Baroque aesthetic evolved as a style both dramatic and elegant, one offering a deep sensory experience. It also became representative of the Church’s grandeur, wealth, and power.

As the power of the state replaced the power of the Church, absolutist rulers of the 17th century and 18th century adopted the Baroque. Baroque furniture saw its heyday in this period, as furniture designers began to create ornamented, elaborate furnishings for the monarchy. The style spread across Europe, finding fertile ground in Italy, France, England, Flanders, and the Netherlands, even making the journey to the American colonies.

France, in particular, saw a massive genesis of Baroque furnishings. A notable Baroque fan is Louis XIV, who used the Baroque to show the power of the state and monarch. At his Gobelins factory, the workers veneered furniture with foreign woods and tortoiseshell, each inlaid with metals such as pewter, brass, and ivory, completely gilded. Other pieces were completely overlaid with repoussé silver.

Baroque was eventually replaced by the Rococo style in the early 18th century, as Louis XV and other monarchs came and went.

The Baroque artistic style features exaggerated motion married to crisp, clear detail in a dramatic, heavy manner. This combination typically produces exuberance and drama in everything from painting to furniture. In order to appeal to its audience in a blunt, human, and evocative manner, the Baroque aesthetic reveled in ornamentation, intending to evoke a sensory response.

The word itself hails from the Portuguese, Barroco, which referred to pearls of odd or irregular shapes. This is apt, as many artists at the time found Baroque work unappealing. It was gaudy and overly-ornamental.

Furniture from the Baroque period is unique in many ways, from its exquisite marquetry to the beautiful and exotic woods, such as rosewood and sandalwood, used for decorative additions. Hardier local woods like oak, walnut, chestnut, and other hardwoods were commonly used in base construction.

Other stylistic hallmarks of the period include symmetrical design, curved legs, foliage motifs, gilt wood, ebonized detailing, and the aforementioned marquetry. The latter consists of laying different colored wood veneers onto the furniture’s surface to create patterns and pictures.

Twisted columns gave a sense of dynamism and coiled, thinly-veiled power. Meanwhile, the pedestal feet, and later, curved legs, often interlaced diagonally. Everything from sculptures to pediments decorated the heavy moldings. Many Baroque pieces feature the initials of the original owner or commissioner carved or inlaid into the wood.

So, you want to buy a piece of Baroque furniture? You’re in the right place. At Styylish, we offer dozens of Baroque-era items in our collection.

There is no real comparative aesthetic among other antique European styles. When you see a Baroque piece, you can tell it’s Baroque almost instantly. Our stock is always changing, so check back often for new additions.

At the end of the day, the process of purchasing antiques isn’t like buying a car or choosing a phone plan. You must pick the furniture that resonates with you and your space the most. When you discover an antique item that you connect with, you’ll know!

So head over to the Styylish shop and get started in your search!