The History of Lockets, Queen Elizabeth I Locket Ring And Queen Victoria’s Lockets

The History of Lockets, Queen Elizabeth I Locket Ring And Queen Victoria’s Lockets

1. What is the history of the locket?

2. Why lockets are named lockets?

3. What do the symbols on a locket mean?

4. What is the difference between a locket and a pendant?

5. How can you tell if a locket is antique?

6. What is the Chequers Ring?

From ancient times royalty, nobility, merchants, tradespeople and almost everyone desired to own a talisman. These good luck charms were believed to prevent the wearer from being harmed by evil spirits, poor health or bad luck. It is known that ancient Egyptians thought that their amulets were imbued with powers which would protect the wearer. The magical powers were said to transfer from the amulet once it was in close to the body and so they would often be worn on a necklace which may have been made from a simple strip of leather or precious metal.

The wearing and use of amulets was widespread throughout ancient Egypt from 4400 B.C. to the fourth century A.D. The earliest amulets found were crafted into animal form. Amulets depicting deities have been discovered which date to 1070 B.C. Funerary amulets which accompanied the dead into the afterlife were part of the rites.

The Song of Solomon is unique within the Hebrew Bible. It celebrates love and the harmony of two lovers. The man wishes to have his seal worn around his lover’s neck.

In the Italian period known as the rebirth or Renaissance the demand for portraiture became very widespread. Tiny portraits would be contained in lavishly decorated lockets.

﻿Why is a locket called a ﻿locket:

Many people state that lockets gained their name because they often hold a lock of hair from a loved one. This is often the case with mourning lockets which contain the hair of the dearly departed. However, there are those who attest that the term derives from the Old French loquet, door-handle or latch, for the way their covers move on a hinge and close securely.

Wealthy Elizabethans commissioned artists and goldsmiths to make lockets so that they could see images of their loved ones when they were apart. 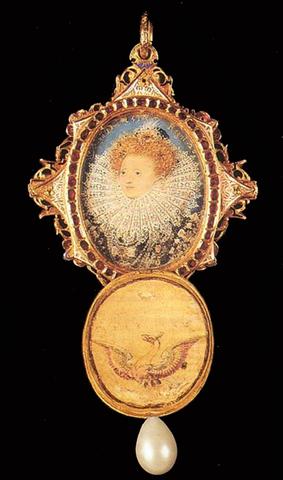 The fabulous locket shown above was painted by the famed English goldsmith and portrait painter Nicholas Hilliard (1547-1619). Queen Elizabeth I gifted this pendant to the newly knighted Sir Francis Drake. Hilliard’s delightful portrait is set in a gold case adorned with enamel and rubies. The deeply symbolic depiction of forget-me-nots and fleur-de-lis lend so much meaning to this gift.

Nicholas Hilliard was the most famous miniature portrait painter of his generation. This genre of painting is extremely laborious and at times a paint brush containing only one single hair would have been used to create the most minute details. Hilliard’s superb work as a goldsmith and artist made him the ideal choice for royalty seeking to commission exquisitely beautiful lockets. 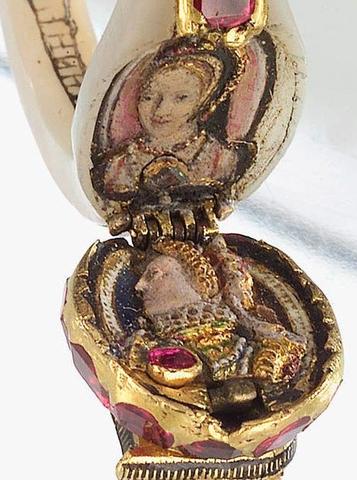 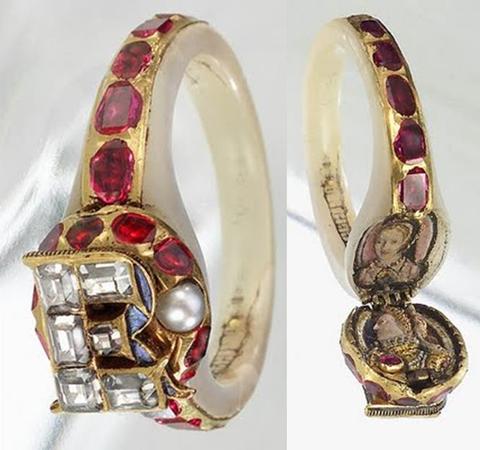 On the death of Queen Elizabeth I a ring she wore every day was found to be a locket ring. Contained within the ring was a secret compartment with a portrait of herself and also of her mother, Anne Boleyn, who was executed on the orders of her father, King Henry VIII, when she was only two years old.

This ring is now known as the Chequers Ring, because it resides in Chequers, the UK Prime Minister’s country residence. This fabulous locket ring features table cut diamonds forming the letter E. In blue enamel we can see the letter R. The ring is crafted from mother of pearl set with table cut rubies. 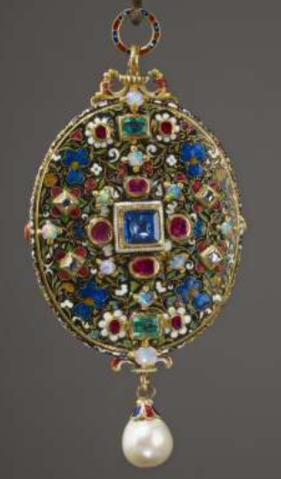 Copyright -The Trustees Of The British Museum

The locket in the two images shown above was painted by David Des Granges c. 1640. It comprises of gold, covered with champlevé enamel. Exquisite pansies, marguerites and green foliage adorn the case, which is also set with sapphires, rubies, opals and diamonds. Sir Grenville was a Cornish Royalist General. His portrait is watercolour on vellum.

Lockets have been popular throughout the ages. The symbols that adorn them have hidden meanings.

Hearts, of course symbolise love, compassion, charity and joy. A crown on top of a heart means “ruler of my heart”. Two hearts entwined means “Forever in my heart”.

The swallow is often engraved on antique lockets. This symbol is said to be a good luck charm that will give the wearer a safe journey and return home.

Crescent moons celebrate the moon goddess and change, as the moon changes its form.

Stars are symbols for guidance of the spirit and a sense of direction.

﻿What is the difference between a locket and a pendant?

﻿Lockets can be displayed as a pendant, as they are often suspended from an elegant chain. However, lockets have recesses in which to place a portrait, photograph or a lock of hair.

﻿What are mourning lockets?

﻿Long before the invention of cameras people wished to have something to remind them of their dearly departed. Many people could not afford to have a portrait painted of their children, husband or wife and so they kept a lock of hair and enclosed it in a locket, so that it would not become lost. Eventually, these locks of hair were also considered ornamental and they were woven into intricate designs which can be very beautiful. 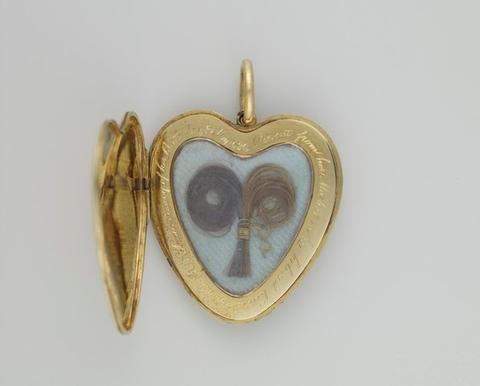 Lockets were very popular even before the reign of Queen Victoria. On the anniversary of her first birthday Princess Victoria was gifted the locket shown above. The inscription on the bezel reads: Present from her Mother to her beloved Victoria on the First Anniversary of her Birthday 24 May 1820.

Princess Victoria’s mother, the Duchess of Kent, commissioned this locket and had locks of her hair and those of the Duke of Kent installed behind a protective glass panel. The Duke had died before his daughter’s first birthday. This was one of Queen Victoria’s most treasured possessions. She felt a deep sadness on the death of her mother. She discovered many letters that her mother had written which showed what deep emotions the Duchess of Kent felt for her daughter.

This locket was one of a group of jewels placed in the Albert Room at Windsor Castle after the Queen’s death in 1901. This was the room in which Prince Albert had died in 1861 and the Queen left instructions for a specific list of jewellery to be displayed there. These were not to be passed on the family.

The Duchess of Kent would also give lockets containing her hair to Victoria’s own daughters, Princess Helena, in 1846 and to Princess Louise, in 1848.

In a journal entry dated October 1839 Queen Victoria described herself as wearing a lock of Prince Albert’s hair night and day in one of her lockets. The following November her aunt, the Queen of the Belgians, gifted a diamond heart locket to Queen Victoria.

Prince Albert took the lock of his hair out of the locket Victoria was wearing and placed it in the diamond heart locket, which he then attached around her neck. 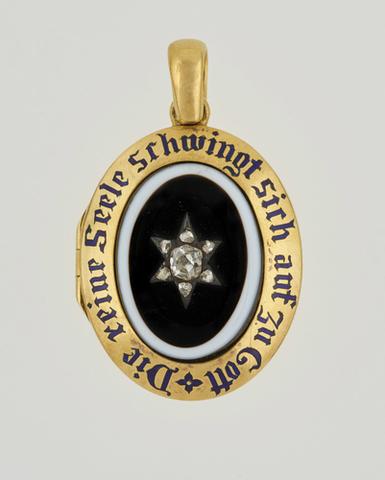 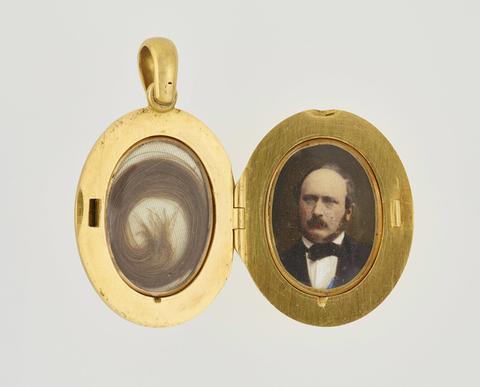 INTERIOR OF LOCKET SHOWN ABOVE

The interior opens to reveal hair on one side and photograph of Prince Albert under protective glass covers. 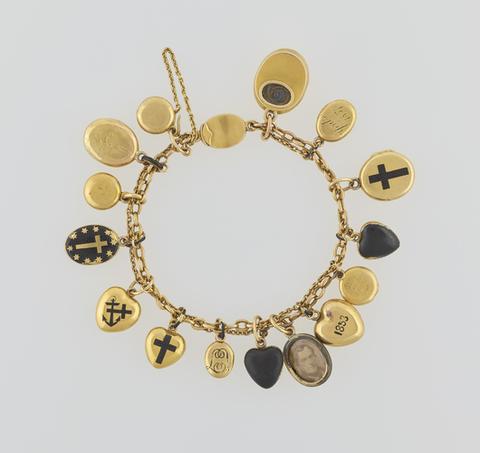 The Royal Trust Collection, One of the mourning bracelets she wore constantly after Albert’s Death, consisted of sixteen various oval and heart shaped lockets, enameled in black on gold. Some set with jewels, others engraved, several with inscriptions and miniature photographs.

Queen Victoria gave many lockets to her family in Britain and those scattered throughout Europe. She also commissioned lockets for her closest staff as a measure of her gratitude. 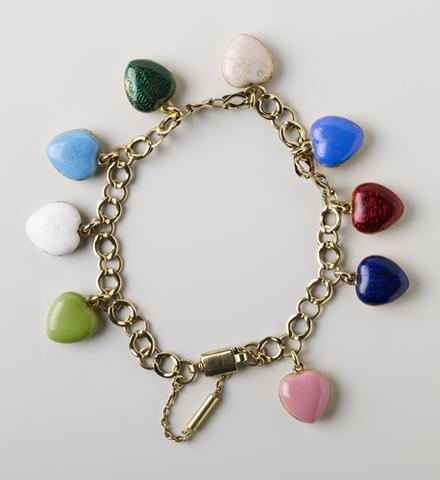 This gold and enamel bracelet was given to Queen Victoria by Prince Albert on 24 November 1840. The inscription on the clasp states that it was given to her three days after the birth of their first child, Victoria. After each child was born Albert commissioned another enamelled heart.

Text from Victoria & Albert: Art & Love. The hearts record the birth of the children as follows: pink for Princess Victoria, turquoise blue for Albert, red for Princess Alice, dark blue for Alfred, translucent white for Helena, dark green for Louise, mid blue for Arthur, opaque white for Leopold and light green for Beatrice.

The trend for gifting lockets was still immensely popular in Edwardian England. The most well heeled would have hallmarked gold lockets fitted with portraits of their loved ones. 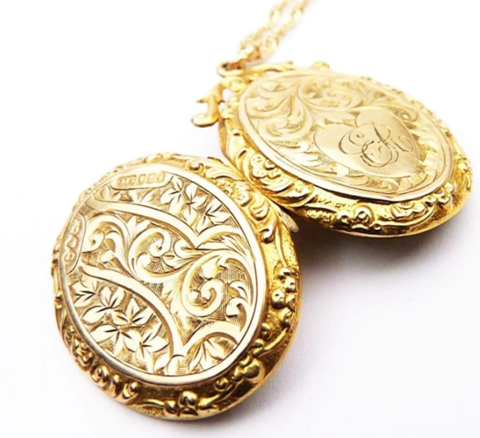 How do I know if my locket is an antique?

The beauty of the British hallmarking system is that most items made from precious metal will bear the date year. You can read the hallmarks to see who made an item by looking at the maker’s mark. The place of assay will be denoted by an assay mark. For example Birmingham assay is shown by the anchor mark. London assayed items will have the leopard’s head stamp. The composition – the carat of gold will be shown as a hallmark too. The date year framed in a cartouche will enable you to give a precise date for each item. Once you know the place of assay you can look up that assay office online and peruse their charts to find the date letter. The alphabet is repeated and so you have be careful to make sure that the letter is the correct font and the cartouche is also the same before deciding on the date. In the event of precious metals being stamped with a carat stamp and no date year being present the style, patina, clasps and catches can also aid dating. As can original portraits and photographs and the clothes the portrayed are wearing.

We only source hallmarked gold. 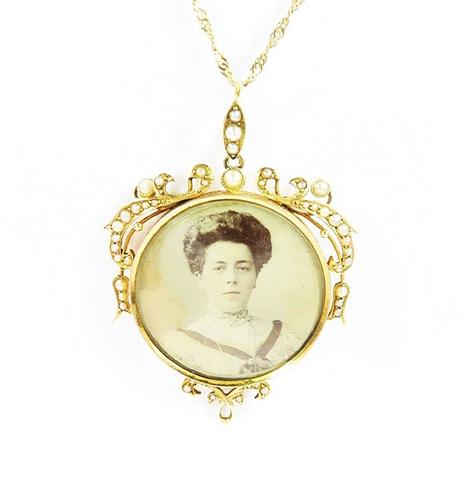 A 15 carat yellow gold Edwardian double portrait locket with an ornate 18 inch vermeil necklace. This fine and impressive piece is ornamented with 38 lustrous seed pearls. The original protective glass is in place on both sides. The pendant is hallmarked to the reverse of the setting with the 15 carat gold fineness mark (15C). The original evocative hand tinted portraits are present. 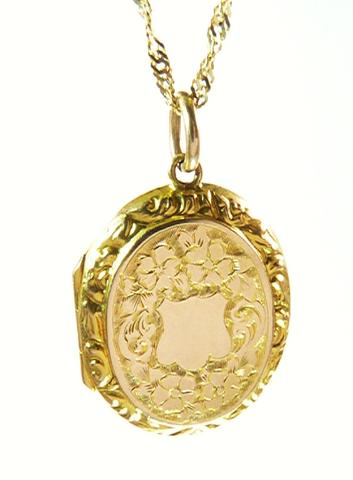 They prayed that these lockets would not become morning lockets.

Sadly with so many losses in World War I many of these beautiful lockets became poignant reminders of what could have been.