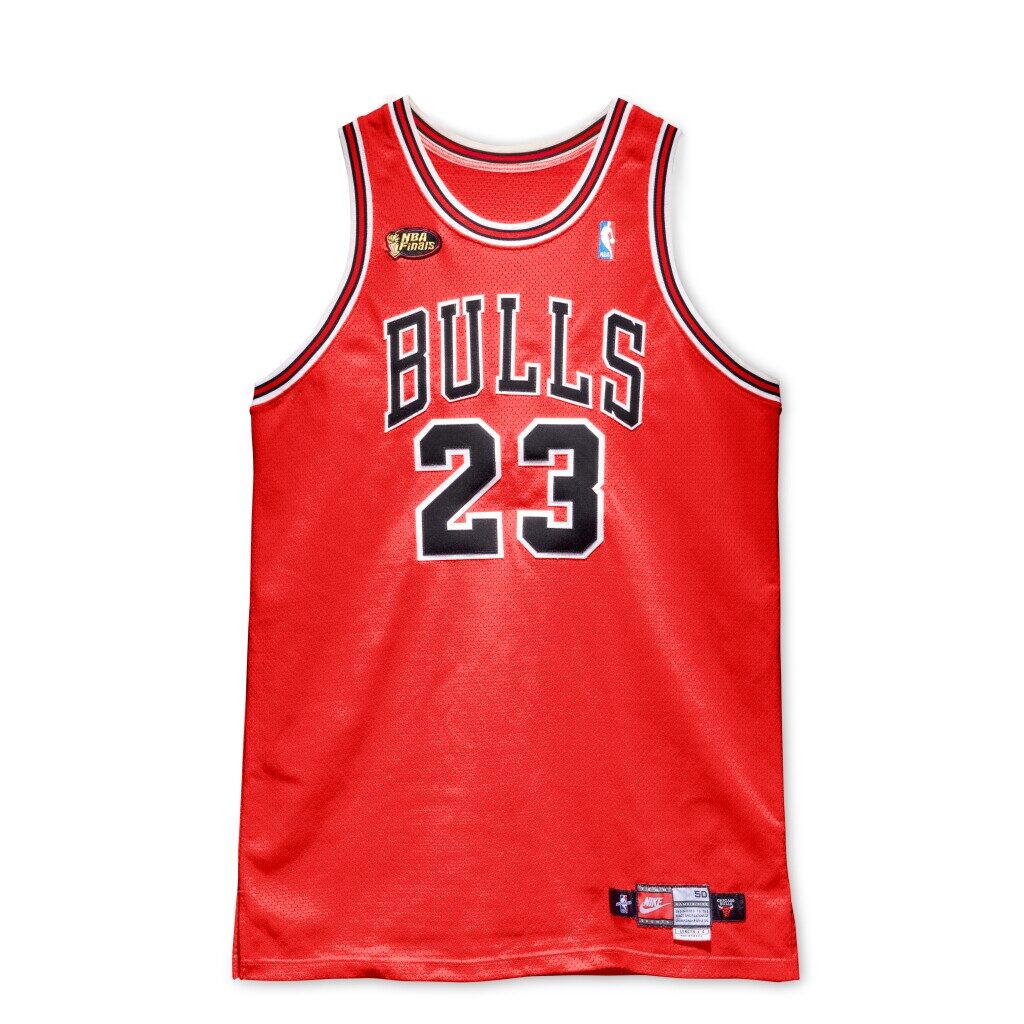 New price records continue to be set in sports memorabilia.

In August 2022, a Topps 1952 Mickey Mantle card set a new standard for sports collectibles when it sold for more than $12 million, besting the realized price for Diego Maradona’s Hand of God jersey. While the Mantle record remains intact (for now), the Maradona jersey has again taken a back seat to a new auction, as a Michael Jordan listing has surpassed the uniform record.

In September 2022, Sotheby’s sold Jordan’s last-ever Chicago Bulls basketball jersey, with a final price of $10.091 million. The red away jersey was the final uniform worn by His Airness during the Bulls’ last championship run in 1998, during which Jordan and company captured their sixth Championship in eight years.

The sale far exceeded Sotheby’s pre-opening predictions, as the auction house originally had the jersey pegged to be worth between $3 million and $5 million.

The Jordan jersey was one of the featured lots for Sotheby’s in its Invictus Part II auction. Other notable sports items that were part of the big sale included:

The Jordan sale is not surprising, given his sustained stature as one of basketball’s all-time greatest players. Besides his six NBA Championships (and playoff MVPs), Jordan was a five-time regular season MVP and ten-time scoring champion. He also remains in the top five all-time scoring leaders and holds the regular season and post-season records for points-per-game average (30.12 and 33.45, respectively). Aiding in the sale, unquestionably, was the popularity of the recent documentary series The Last Dance, which chronicled the Bulls’ dynasty and their final NBA Championship.

Jordan’s career began with Rookie of the Year honors following the 1984-85 season, and expectations on his shoulders were unquestionably fulfilled when he hung up his sneakers for the first time.

Jordan’s basketball career was briefly interrupted by his choice to retire and pursue a career in baseball. Following what many expected to be his last game (the playoff series in which he wore the auctioned jersey), Jordan returned to the game in 2001 for a two-season run with the Washington Wizards. Incidentally, Sotheby’s has auctioned a couple of those Wizards jerseys, including one piece that sold for $35,000.

Michael Jordan jerseys have been relatively hard to come by on the secondary market, but they have popped up occasionally.

Among the Jordan jerseys that have made their way to the auction block over the years is one that can best be described as The First Dance. Upon signing his first contract with the Chicago Bulls in September 1984, Jordan was presented with his first professional jersey. That uniform piece sold in December 2020 in a Julien’s Auctions lot for $320,000.

But many Jordan jerseys, rather than appearing in the open market, went into the hands of trading card companies. These jerseys were then cut up, with pieces embedded into basketball cards. Primarily, this has been Upper Deck which has had an exclusive agreement with Jordan for decades.

Thanks to this agreement and others Upper Deck possesses, some extremely high-dollar card sales have come up, including swatches from a Michael Jordan jersey. Among these basketball cards is a 2007-08 Upper Deck Exquisite card that features Jordan alongside fellow Upper Deck exclusive signee LeBron James and Magic Johnson. One of these cards sold for $130,000 in a collectable.com auction in February 2022. A Jordan game-used jersey autographed card, given exclusively to Upper Deck employees, sold in April 2021 for $50,000 on eBay.

Bearing this in mind, you can see how acquiring a Jordan jersey is a tall task, but getting a uniform from an NBA Championship series is even harder. “For a host of reasons, NBA Finals jerseys are incredibly scant from Jordan,” Sotheby’s stated in the auction description. “And as such, they are regarded with the highest levels of importance in the collecting community.”

The record price for the Michael Jordan jersey is put into even greater perspective when compared to previous NBA Finals auctions featuring the Hall of Famer.

Consider, for example, a 2017 auction for another Jordan Finals jersey. This home jersey was sold by Memorabilia.expert and garnered a final sale price of $72,600. The sale is by no means small, but Sotheby’s sale dwarfs it.

Jordan isn’t the only basketball legend seeing strong game-used gear recently. In February 2022, an Oscar Robertson game-worn jersey from his rookie year sold for $320,000 in a collectable.com auction, while a pair of Kobe Bryant’s rookie year autographed sneakers sold for more than $150,000 by collectable.com.

Jon Waldman is a Winnipeg-based writer. He has written for Beckett, Go GTS, Canadian Sports Collector, and several other hobby outlets over his two decades in the hobby. His experience also includes two books on sports cards and memorabilia. Connect with Jon on Twitter at @jonwaldman.

Not All Vintage Vinyl Records Are Viable or Valuable – WorthPoint

Not All Vintage Vinyl Records Are Viable or Valuable – WorthPoint