What are the differences between solid gold, gold front & back, rolled gold, gold plated, vermeil and pinchbeck.

Many people spend hundreds of £s on antique gold lockets, pendants and jewellery only to learn that they are not actually “solid gold”.

Searching for gold jewellery can be a very time consuming and sometimes confusing pastime.

This post will help you to understand the differences between the terms and enable you to get the best collectibles which will retain their pleasing appearance without any need for cleaning or maintenance. 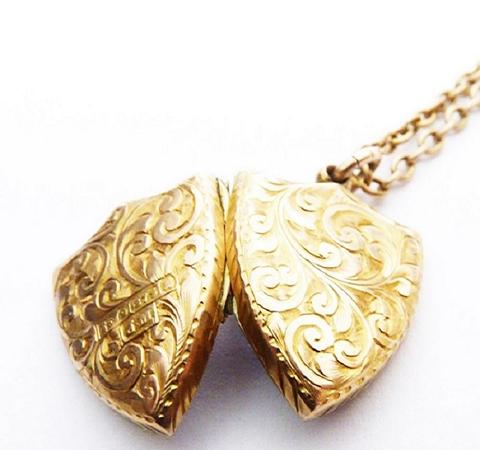 This term is often used to describe hallmarked gold. The benefits of purchasing items comprising from hallmarked gold are that you are given precise information and that they are valuable.

Fully hallmarked British gold will not only have the maker’s mark, place of assay, the carat but also the date year. You can be certain that an item is Victorian, Edwardian or 1920s etc because of the date year hallmark. Nothing is left to chance. When perusing the assay offices’ charts to ascertain the date of your item you should look at the font of the letter and also the cartouche that surrounds the letter, as the alphabet is repeated throughout time. Thankfully the assay offices use many different fonts to allow exact dating.

Solid gold will retain its glorious appearance without fading or any need for cleaning.

For the reasons stated above we prefer to source only hallmarked gold.

View our collection of hallmarked gold lockets, pendants and bracelets.

This term is often used to describe antique gold lockets which have a front and back made from gold. The gold front and back are applied to base metal or sometimes sterling silver. The main body of the locket, the case, hinge etc is base metal.

Many gold front & back lockets are sold for large sums of money and potential customers often assume that these pieces are the same quality and worth as solid gold lockets. This assumption is not correct.

This term means that the locket or piece of jewellery is plated with a layer of gold.

Rolled gold is achieved by mechanically plating or fusing a base metal sheet with a sheet of carat gold.

Gold-filled is the term used when there is a heavier coating of gold than rolled gold. The plate of gold is soldered or welded on to metal. To qualify for the term gold-filled the item must have plating which is at least 1/20th of the weight of the metal that has been coated. 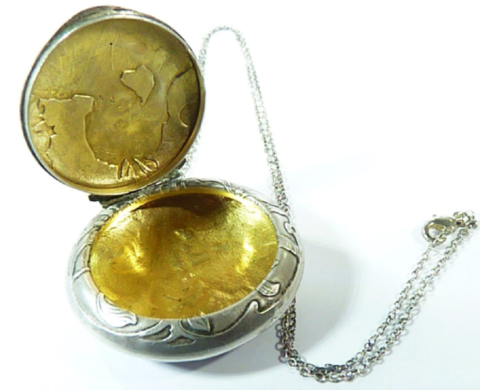 In the mid -18th century the process of fire-gilding was developed in France. Later on it was discovered that jewellers involved in this work became blind due to their exposure to mercury, which was used in the process & subsequently it was banned. In modern times electrolysis is used to bond the gold. This method is safe. Vermeil jewellery / jewelry has been popular since the 19th century & it has gained great popularity, as it makes gold collectibles more affordable.

Often there is confusion about vermeil (ver-mey) & gold plated items. When a piece is said to be vermeil it can only have a sterling silver / high grade silver base. Gold plated items may have a base coat of metal, for example you can apply a layer of gold to base metals like, pewter, copper & brass. Often gold plated items have a very thin coat.

In order for an item to be correctly described as vermeil it must have a minimum millesimal fineness of silver .925 parts per 1000. The gold layer must be 14ct / k or higher in purity. The layer of gold must be at least 2.5 microns thick.

Whereas, gold plated items can be less than 0.5 microns thick. Vermeil & gold plating involves fusing gold onto another metal – in the case of vermeil this is sterling silver / high grade silver.

Vermeil pieces have a much higher value than gold plated items because of the sterling silver contained in the piece & also because vermeil is much more durable than gold plating.

In the Georgian era gold was 18 carat and completely out of the reach of most people.

It was not until 1854 that 9 carat gold was legalised.

Many people wanted to wear gold jewellery and early in the 18th century a London based clock maker and jeweller, Christopher Pinchbeck, invented Pinchbeck which looks like gold and yet is affordable to almost all people. Pinchbeck is an alloy of copper and zinc.

It is testament to the skill of Christopher Pinchbeck that the adorable mourning locket shown above still looks so glorious two hundred years after its creation.

Pinchbeck also became sought-after by travellers who dared not wear their gold jewellery whilst travelling in coaches along the highway. If highwaymen stopped their coaches they would hand over their Pinchbeck jewellery without suffering significant financially loses.

Not all antique gold is hallmarked. Georgian and some Victorian gold may not be hallmarked.

However, there can be risks buying gold which does not have hallmarks.

The potential purchaser will read ‘tests as gold’ on the seller’s advertisement.

Unfortunately items plated in gold will often ‘test as gold’ when an acid test is conducted.

Professional antique dealers and jewellers know how to conduct the acid test to gain reliable results.

However, this test will mean removing a small part of the surface gold by scratching to see if base metal appears and then pouring on the acidic solution.

We find it easier to source hallmarked gold items rather than purchase something that may fail the acid test once it arrives.