The antique game table is a fascinating and versatile piece of furniture, with a rich and varied history.

Television and PlayStations weren’t always the entertainment products of choice. As far back as thousands of years ago, people played board games like backgammon on gaming tables.

Antique game tables and card tables are some of the most interesting pieces we sell here at Styylish. In this post, we’ll cover a bit about the history of this unique piece of furniture, including its early origins and evolving forms over the centuries.

As far back as 3,000 BC, people were playing backgammon in Persia on antique game tables. Variations of the classic tabletop game later spread to Egypt, Rome, Mesopotamia, and China. That aside, what we think of as the “antique gaming table” first began to appear in the 11th century, and evolved in later centuries into the more classic gaming table. 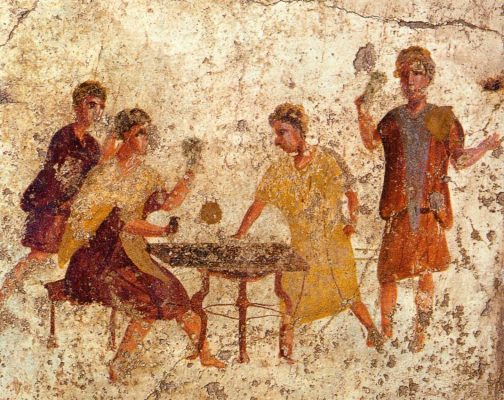 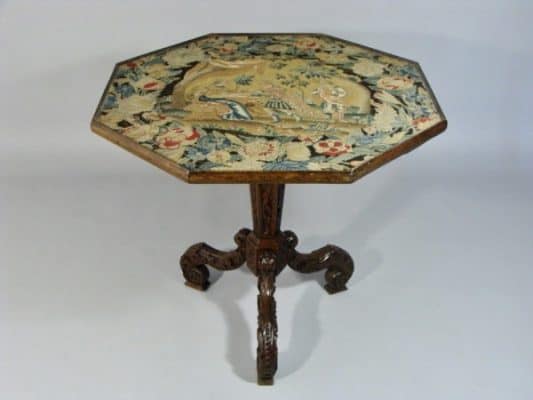 The government actually outlawed gaming tables in England during the Elizabethan period. That said, by the later 17th and early 18th century, card tables were becoming extremely common. Needlework tops were extremely common in early antique game tables. This is because they were practical to use when playing. They kept the noise at a minimum and prevented the cards from slipping accidentally at any point. Many needlework panels featured intricate card designs and had slots or recesses to hold chips and money.

Moving into the 18th century, the game table became wildly popular. This is particularly true during the reigns of the later Louis monarchs of France, Louis XIV, XV, and XVI. At the time, nobility and other upper-class citizens were creating specialized rooms in their homes.

Gone were the days of massive halls, transformed into a ballroom or dining room on a moment’s notice.  Instead, people followed the style of a large number of smaller, more specialized rooms, where the furnishings were permanent. As a result, they needed more specialized niche furniture offerings, like antique game tables, to adorn these spaces.

Prior to the revolution in France, only the upper aristocracy could afford specialized furniture such as cosmetics dressers, toiletry commodes, and so on. That’s why the game table became incredibly popular. While it technically was a specialized furniture product, it could often accommodate a variety of games, from chess to backgammon to cards. Of course, it could also simply serve as a table to sit around or a side table. It had many, many uses, so even lesser nobility and the middle class began to commission game tables for their homes.

Gambling in the Aristocracy

Since the aristocracy in 18th century France was outlawed from engaging in commercial enterprise, many aristocrats at the time took up gambling. Often, they lost their entire fortunes in rash bidding. Typically, wealthy folk would take their own personal table with them to gambling sessions, which is why foldable tables were so common. Historians actually have evidence that Queen Marie Antoinette was a compulsive gambler herself! 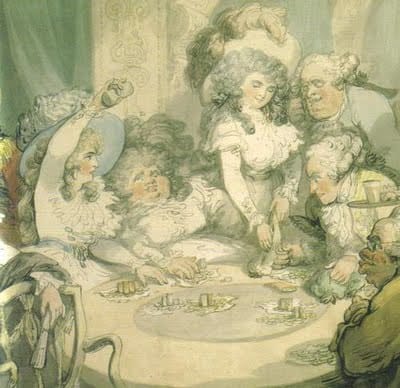 Variations of the Antique Game Table

Perhaps more than any other antique furniture piece, the antique game table comes in a variety of forms. It was commonly built on commission, so the client was specifying size, style, and so forth. Most antique game tables feature a double-sided top. One side sports a gaming board, while the other has tooled leather, or another similar surface which the owner could use to write.

The top board attaches quite loosely in many cases, simply sitting on top, in others it latches down securely. Sometimes it is hinged, like with flip top game tables, sometimes not. In some cases, a desk will have multiple interchangeable top boards stacked on top of each other. In this way, the antique game table accommodates a variety of different board games.

Some game tables feature lobed outset corners to hold candle sticks, while others incorporated hinged legs to store the tables.

The game ‘Bouillotte’ grew in popularity in France towards the close of the 18th century. This game inspired it’s own game table, along with a Bouillotte lamp. These tables generally feature marble tops and low brass galleries.

The Victorian era card tables typically have a singular column, using a platform or thick tripod base. Rosewood and walnut, newly available and fashionable at the time, were the materials used to make game tables during this era.

In Victorian times, we also find the ‘Loo’ table. This table drew its name from the 17th century card game ‘lanterloo.’ These antique game tables typically feature round or oval tops which tilt. That said, today the ‘loo table’ really refers to any large Victorian tilting table.

Some tables were made for both gaming and tea serving. These feature one polished surface for serving tea coupled with a baize-lined top to play games on. Inside the ‘well’ of the table, we typically find a storage space, where the owner would keep cards or chips. Some tables incorporate a secret drawer or compartment as well. Mahogany is the typical material used to fashion these tables, but prior to the mid 18th century, walnut was more common. Often we find a hinged back leg, incorporating a spacer to support the tops. In some cases, both legs swing out, with a leg at each corner and a slide to keep the table stable.

Here at Styylish, we have a wide collection of game tables. So, if you’re interested in antique game tables, you’ve come to the right place.

It’s our mission to find unique pieces for individual interiors… so let us help you find the right antique game table for your space!